COMPLETION OF PROJECT “PROTECTION OF ALKALINE FENS IN SOUTHERN POLAND”

As already mentioned in previous posts, the project was extended until the end of 2018 (by 6 months), due to change of water management law in Poland – what caused prolonged arrangements with stakeholders and implementation of measures improving water conditions in alkaline fens. Today, in the last days of this year, we can confidently say that we have managed to implement the planned activities, including the most important project site – the Sniatycze spring mire cupola (Komarów). We wrote earlier about this unique in Europe spring mire cupola, and it is worth recalling here that its extraordinary values include, above all, not disturbed geological structure. The start of, now 600 cm deep profile,of calcareous necrosis deposition is dated on 10 000 years ago! This valuable alkaline fen is cut by the Sieniocha River, which drains the cupola, causing overdrying and disappearance of the characteristic alkaline fen vegetation. In order to counteract those negative and progressive changes, in the agreement with the site manager (PGW Wody Polskie, RZGW in Lublin), we planned to build “a antifiltration wall” that will limit the drainage of the dome by the river. It was the most labour intensive and expensive measure planned in the project. The anti-filtration wall was made of oak boards, 2 m long, connected vermicularly to each other with a “tongue and groove” method and literally driven into both sides of the Sieniocha river (without interfering with the river bed and flow) over 300 m on each side. All works were performed manually and in the last phase in not very favourable weather conditions, when the temperatures dropped significantly below zero. The phases of the works are shown below (photo 1- 5).

Within the fen, an automatic water level recorder was installed to monitor the effects of the wall. However, only during works and just after its completion, the first positive effects were already observed – water accumulating behind the wall (on the side of the dome). The effect of this kind of infrastructure corresponds with the effect of minimum 20 pcs of dams built on the river.

In addition to the above mentioned wall, a number of other smaller but equally important investments have been completed or implemented, i.e. throttling culverts, “biological damming” within 5 alkaline fens in two Natura 2000 sites: Dolina Sieniochy PLH060025 and Łąki nad Szyszłą PLH060042 (photo 6).

Thanks to the postponement of the project’s completion date, the planned activities have been successfully implemented. In total, as part of the project, 65 dams, gates, culverts, biological structures or other water management solutions were adapted. It would not have been possible without cooperation with the site managers: PGW Wody Polskie, local and regional authorities and landowners who agreed to implement the works. For your commitment to the active protection of alkaline fens – thank you very much!

All activities carried out under the project have been described in detail in the Scientific Report and  Guidebook on alkaline fens conservation. Publications can be found in the FILES page. 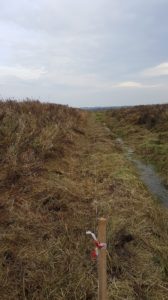 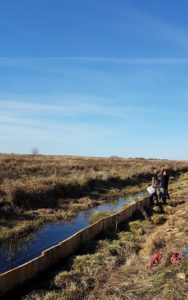 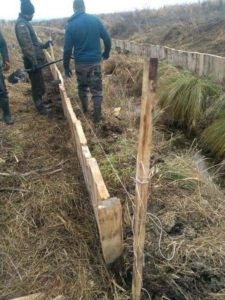 Photo. 1. Defining the course of the wall, Photo 2. First few meters of the wall – driving, Photo. 3 Driving the other side of the wall (photo: W. Spychała) 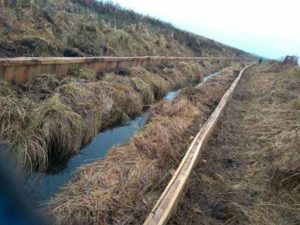 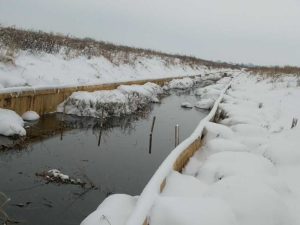 Photo 4. The wall is almost finished (photo: W. Spychała). Photo 5. The final effect of the anti-filtration wall at the increased water level in the river (photo W. Spychała). 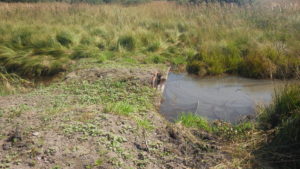