On 14.11.2013, in Kartuzy Club representatives signed three notarial agreements of purchase three parcels in which there are the most valuable parts of the 7230 habitat at “Sulęczyno”.

Since the beginning of the project, the staff of the Club undertook actions to contact the owners of private land on the premises where activities are planned in the project – including the object Sulęczyno – in order to obtain permission to carry out conservation measures. As a result of these efforts, in August this year, a meeting at the local commune office was held, on which we invited the owners and managers of land lying within the proposed reserve, representatives of the local authorities and Regional Directorate of Environmental Protection in Gdańsk (partner in the project). As a result of this meeting was to establish direct talks with the part of private owners who were interested in selling their property to the Club. Ongoing negotiations with key owners led to the fact that on 14.11.2013, in Kartuzy Club representatives signed three notarial agreements of purchase three parcels in which there are the most valuable parts of the 7230 habitat at “Sulęczyno”. They have area of ​​3.12 hectares and together with parcels which are in the manegement of State in the near future create reserve Mechowiska Sulęczyńskie with a total area of ​​approximately 21 hectares. If Club manage to purchase additional land adjacent to those already owned by the Club, they will be included in the newly constructed reserve as well. To reserve, together with the RDOS in Gdansk will soon be proceed draft of management plan.

A few words about the object: since many years in this area was planned a reserve called Mechowiska Sulęczyńskie. The area, on which previously conducted researches were coordinated by prof. Maria Herbichowa and prof. Jacek Herbich, is fairly well known amongs the protection of peatlands enthusiasts. In terms of the origin Sulęczyno is typical fen where shallow layer of peat (from several to tens of centimeters which indicates a relatively recent completion of the hydrosere process) is underlain by several meters of lime gyttja layer. In a few places fen bears traces of its former peat excavation. Despite this, Sulęczyno fen is one of the best preserved and most valuable alkaline fens in western Poland. On those several hectares are present well-developed patches of characteristic brown-moss vegetation. Rare species such as: Paludella squarrosa, Tomenthypnum nitens, Helodium blandowii occur here in large numbers. Also represented are such rare species as: Cynclidium stygium or Pseudocaliergon trifarium. Sulęczyno is the site of occurence of Liparis loeselii. We also expect the occurrence of bog saxifrage. Special impression makes population of marsh helleborine Epipactis palustris numbering at least several thousand individuals! One can see here numerous and large-sized patches of phytocoenoses characteristic for alkaline fens – including: Eleocharitetum quinqueflorae, Caricetum paniceo-lepidocarpae, Caricetum diandrae, Menyantho-Sphagnetum teretis, Caricetum appropinquatae var. fen. Due to the above conditions, this area has a high national importance and is of significant importance to the EU in protecting 7230 habitat. Unfortunately, part of the area is quite extensively overgrown by forest vegetation which constitutes a threat to those exceptional natural values ​​of the area. An additional difficulty for the conduct of conservation measures is the fact that the ownership structure is quite complicated – about half of its area is on private land.

Below are some pictures of the object and from the day of signing the notarial agreements: 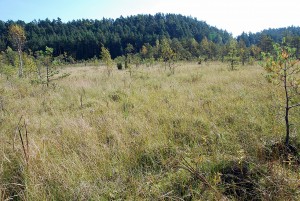 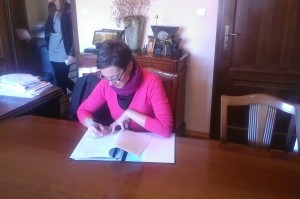 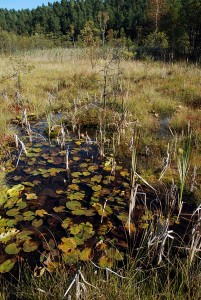 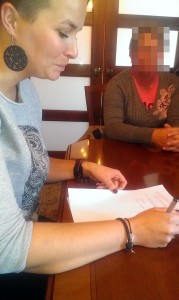